THE BEGINNING OF A WORLDWIDE BIKERDEMO 2018

The enforcement of children’s rights is a transnational affair

We have to connect ! 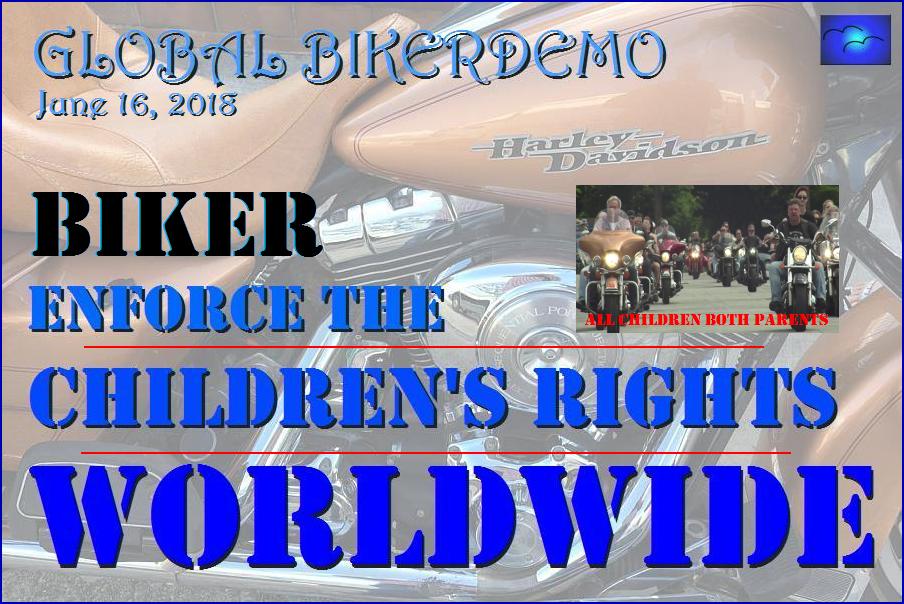 Worldwide BIKERDEMO for children’s rights to both parents, four grandparents, family and a good life in their homeland.

.
Mannheim/Weiler: ARCHE makes a call for more states to join the Mannheim-based BIKERDEMO 2018. Last year the first BIKEREMO was carried out by Otto Höfler and Germanen MC Mannheim. This year comes the second edition – desirably also in other countries as a follow-up partner to establish.

.
Children’s rights must have NO borders!

this year on June 16th we should try to activate the first American, Italian, Polish, Austrian and Swiss city to give permission for a BIKERDEMO, which joins the German movement from Mannheim.

This BIKERDEMO will show worldwide that we will enforce the RIGHT OF CHILDREN ON BOTH PARENTS, FOUR GRANDPA, FAMILY AND A GOOD LIFE IN YOUR HOME.

Speak to biker clubs to assist !.

Dear Ladies and Gentlemen of the German Press Agency Mannheim,

in the run-up to the second BIKERDEMO for the rights of children, which is raised internationally and starts from Mannheim, we are already sending you information material and our contact details.

We would be delighted to announce our demonstration via your press organs in good time, so that more bikers and bikers clubs active in the protection of children can join us. We have just submitted a request to the Federal Ministry for Family Affairs, Senior Citizens, Women and Youth on the current state of incorporation of children’s rights into the Basic Law.

.
Our data for you

1. The BIKERDEMO 2018 will take place on the 16th of June from the Mannheim exhibition center.

2. The violation of children’s rights after separation and divorce affects several million children in Germany, Europe and worldwide. The cruel phenomenon, kid – eke – pas, child – robbery [not only] in Germany – parent – child alienation – Parental Alienation Syndrome ‚is most broadly and most precisely explained in the open letter to Donald Trump, the head of the ARCHE as worldwide An active networker and manager of the total movement for the observance of the rights of children to father and mother, to family and to a good life in their homeland at the end of last year sent to the White House and to the American Embassy of Berlin. The arrival of the letter was confirmed both from Berlin and from Washington.

4. For over 20 years sufferers act for those affected in self-help groups. These have established themselves in Germany, Europe and worldwide. In this flyer, you will learn how the topic of kid – eke – pas can be seen from the perspective of the self – help group of VAfK Köln e.V.

.
9. Legal anchoring of children’s rights – binding articles in the Basic Law and in the ECHR (European Convention on Human Rights) and on the online press release or BIKDERDEMO 2018

If you have any further questions, please contact the main organizer, Mr. Otto Höfler directly via ottohoefler[ät]t-online.de or under the number 0172 – 1 02 99 95, to the co-organizers, Mr. Andreas Wahl via Andreas. wahl[ät]uni-tuebingen.de or to Mrs. Heiderose Manthey, pedagogue and journalist about archezeit[ät]gmx.de.

All children both parents. And grandparents. And siblings. And family. And a happy life in their homeland! … that’s what governments have to worry about, not violence, power and war! BIKER FOR THE RIGHTS OF CHILDREN !!!